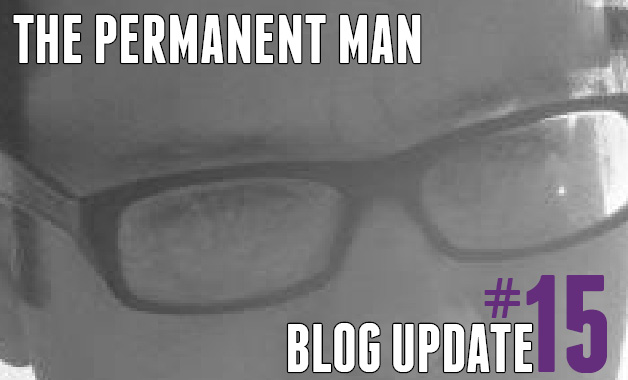 A couple things are happening on The Permanent Man front lines.

First, I finished the draft for the last episode. However, I'm not done writing because I still have to write the penultimate episode. I did these two out of order for a specific reason that I don't want to say now. But when the time comes for that episode to release and you read it, you'll understand why I did it.

Second, the first episode of The Permanent Man, appropriately titled Pilot, is now available for pre-order. You can pick it up at these retailers:


And in case you're on the fence about purchasing the book before release, I have an excerpt for you to enjoy. This comes directly from Pilot and is The Tease portion of the story.

If Patrick Hold failed in his mission over the next few minutes, his future would be bleak and his present would cease to exist.

The confines of a cabinet make it difficult to get comfortable. But Patrick Hold sat there, squirming every minute or so to readjust his legs, neck, or other limbs not made to squeeze into a ball.

It couldn’t be much longer. He timed this out several times. He had years of preparation that led to this exact moment. It would play out the way it did so long ago in his life.

But this time, his eyes viewed things from the other side.

Part of him wanted to change the course of events. He had the power to do it. But then where would he be?

No. Things had to transpire the way he remembered. It ensured his survival. It assured him that he would find his way home.

A slight creak happened outside the cabinet. Though quiet, footsteps approached where he was compressed. It was about to happen.

A loud bang sounded as the door to the room slammed open. This was followed by brief silence until a man’s voice spoke words that Patrick last heard over a century ago.

"Mr. Hold? There's nowhere for you to go. I don't want this to end badly for you. I just want to understand, that's all. Who you are. What you're capable of. But if you resist, I'll have no choice but to use force."

He recalled the moment from his past as it occurred now in his present. How scared he had been. How nervous and full of worry. But now he had confidence. These events were his to control.

"OK,” another voice said from outside the cabinet. A familiar voice, but different. Like hearing yourself for the first time on a recording. “I'm standing up now. I won't do anything."

This was the moment. The moment Patrick Hold set his life on a course he never expected to happen.

He pushed the cabinet door open with his hands. Sitting in front of him was a familiar face. One he saw every time he looked in a mirror.

Patrick Hold stared directly into the eyes of his past self.