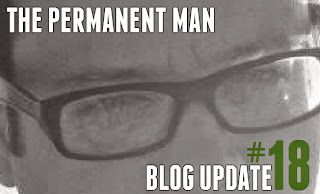 This past week saw a happy turn of events for The Permanent Man series.

Smashwords officially announced that they now allow serialized fiction. That means I can list all the episodes in the series and sell them through many distribution channels exactly as I intended. Did my blog post about them not accepting serialized fiction have something to do with this decision? I'll let you decide that for yourself.

On another note, I have completed writing The Permanent Man season. There is one adjustment to what I did. I intended to write 13 episodes but have settled on 12.

Because the season wrapped up nicely with episode 12. I did have an idea for episode 12 being something different and 13 being the finale. But that idea, though interesting and neat, didn't lend itself to a good story. Rather, it seemed like filler to me and I doubted the "coolness" of the idea would translate into something interesting to read.

Originally, this episode was to be released and called Dog's Eye View. As of now, it's a deleted scene that I might resurrect at some point in the future. Once you read the season, you should get an idea of what the episode would have been like.

So that's where things stand. The Permanent Man is in the editing stages now and more than half of the episodes are complete for publication.

Don't forget, you can pre-order the first episode now. For more details, see the episode guide page on this site.