The Permanent Man #3: Where Loyalties Lie is Live! 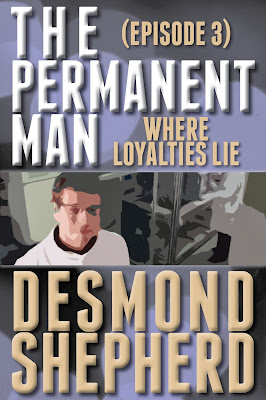 1. Buy Despicable Me 2 today for digital download (I'm sure the kiddies will love it) or
2. You can buy the third episode of The Permanent Man

The Permanent Man #3: Where Loyalties Lie: Cassy Hold is worried about her husband, Patrick. Government agents had arrested him for an unknown reason. Fortunately, Patrick arrives home. Unfortunately, he’s shot and bleeding. She wants him to go to the hospital, but he insists she seek help from an unlikely source: One of the men who arrested him.

If you like shifty secret agents, doctors pretending to be secret agents, and wives doing whatever they can to protect their husbands, then this episode is for you!

And remember, it's never too late to get into the series by starting with the first episode, Pilot. And easy way to do that is to tune in this Saturday at 1 P.M. Eastern time when I do a live reading of The Permanent Man #1: Pilot.