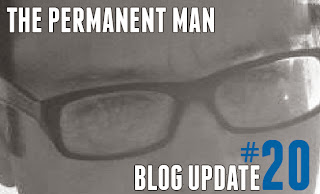 Days before the release of the pilot episode of The Permanent Man, I can say that I have officially completed the first season.

But here we are after this long haul of 20 blog posts that chronicles the journey. I've learned a lot about the writing process with this series. Things that will help me as I write other stories in the future (even now as I'm deep into the third Fram Gage book).

To top it off, I received an email this week from someone I don't know. And they said they can't wait to read the series. That put all the hard work in perspective to have them reach out to me in that way.

A couple things of note:


Thanks again to everyone who has read these posts and shown their support over the nearly eight months I've been blogging and writing the series!