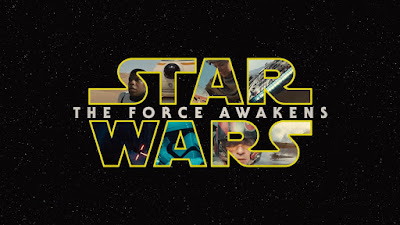 Sure, I may not be writing any blog posts or stories right now, but that doesn't mean I don't have anything important to say, especially about the upcoming release of Star Wars: Episode VII The Force Awakens next week.

I've been doing all I can to avoid spoilers for the movie. In fact, come this Friday, I plan on going dark. No, not The Dark Side, but dark in regards to using the Internet. This includes Facebook, Twitter, Google Now, Feedly, and whatever other social network/web service that might accidentally tell me something from the movie. It's a no-brainer that in this final week as the premiere happens and the movie releases around the world that spoilers will get out there.

But before they do, I thought I'd used my little time capsule here to document some things I expect from the movie. Then I can come back and see where I'm correct and where I'm wrong. These predictions come based off of seeing the first two teaser trailers and reading all the books in the new canon for the series. (I haven't see the actual theatrical trailer, and with a week and a half to go, I don't plan to). Also, I have inadvertently read or heard things, and through osmosis, may have come to some of the below conclusions. Given this is the seventh episode, I feel seven predictions are in "first" order.

So here goes! Let's see how good my Force prediction abilities are:

Prediction I: The Gray Side Menace

Luke Skywalker (purposely absent from the movie poster and trailers per J.J. Abrams, save the image above which I assume is him) will take on a role similar to Obi-Wan Kenobi in Episode IV. However, his motive for the role comes from his realization that the New Republic he fought to achieve by defeating the Empire, really isn't as good as it planned to be. Essentially, he comes to understand another side of the Force. Not a Dark Side. Not a Light Side. But for the sake of a better term, the Gray Side.

Prediction II: Attack of the Drones

An overall theme I keep reading in the books is that there are really no good sides to government. Once someone gains power, others become unhappy with it and have "better" ideas. So, First Order, the Resistance, these things don't matter. And somehow this idea will play out in the movie, perhaps by Rey with Luke Skywalker as her mentor.

Prediction III: Revenge of the Deaths

Han Solo, Leia Organa, and Luke Skywalker will all die at the end of the movie, catapulting us all into a cliffhanger that will leave us wanting more until Episode VIII releases. It may be all three, two of them, or just one. But one of these characters has to die. It will drive emotional impact. It will get fans going nuts!

This is one I think others have speculated about, but I thought it from the moment the first teaser released. I didn't know the character's names at the time, but I do now. Rey and Kylo Ren are brother and sister. They are also the children of Han Solo and Leia Organa.

Prediction V: The Empire Kinda Wants to Strike Back

Kylo Ren has taken on his role because he discovers the remains (mask) of Darth Vader. This would be his grandfather. Ironically, he looks to the values of Vader as a "sheep in wolf's clothing". In other words, the idea was good but the abuse of power was not.

Prediction VI: Return of the Gray Side

We may see Luke Skywalker working in conjunction with Kylo Ren. This doesn't make him a bad guy. He's just playing both sides to see a positive outcome for the sake of humanity.

Finn, shown sporting a lightsaber in the movie poster, has no Force abilities but is a master with a lightsaber. What he lacks in the Force he makes up for with pure talent. Though it may not happen in this episode, I believe he and Rey will fall in love at some point.


What do you think of these predictions? I'd love to hear your thoughts. Feel free to comment. Although, keep in mind that I won't read the comments until after I've seen the movie.