Why does Rey know how to use the Force so easily? 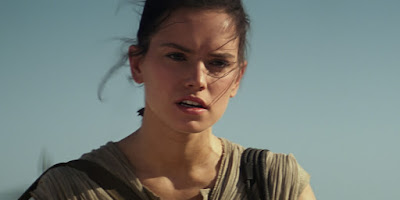 Note: If you haven't see Star Wars: The Force Awakens yet, I suggest you stop reading now if you're the type of person who doesn't want to read spoilers.

In Star Wars: The Force Awakens the main protagonist is a woman named Rey. She lives on the planet Jakku and eeks out a living by scavenging materials from downed ships from way back during the Battle of Jakku. During the course of the movie, Rey "suddenly" discovers she can use the Force. From that point forward, she rapidly picks up how to use the Force to manipulate a person's actions, move objects, and wield a lightsaber.

For some people, this all became quite unbelievable. They think back to Luke Skywalker and Anakin Skywalker. Both needed a lot of training to achieve the abilities they had in the Force. Rey seemingly is a savant. Seeing this, some are reacting in a negative way, saying it is unrealistic with the Star Wars universe and what they know about it.

But that just means they aren't looking at all the clues! 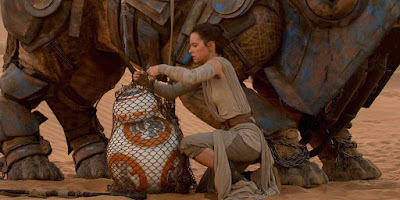 Let's go back to the beginning of the film when we are introduced to Rey. BB-8 is caught by some alien creature in the middle of the desert. She overhears the struggle and approaches the alien. The alien speaks some language we don't understand (nor is it subtitled). Rey responds in that language. BB-8 is released and beeps and whistles. Rey understands what BB-8 says. At one point Chewbacca speaks and she understands him. I think there were another one or two instances of an alien language spoken and she comprehends it. This ability to understand multiple languages (a human C3PO!) is out first clue that there is something special about Rey.

Fast forward to the seen at the cantina. Rey hears what sounds like a little girl screaming and struggling. She follows the voice down some stairs and finds a chest. Within that chest is a lightsaber. She touches it and we're presented with a scene full of flashbacks and some flash-forwards (I'm a Lost fan - hehe). Among the things shown, we see what appears to be Rey on Jakku, crying and screaming (the same sound that drew her downstairs?). A ship is shown leaving the atmosphere. A hand is keeping her from running but we don't know whose. Maz Kanata shows up after this vision happens and tells Rey the lighsaber is Luke's. She then gives Rey some advice to help her use the Force.

At this point, Rey knows something is going on with her Force abilities. And she begins using them as the story progresses to challenge Kylo Ren in a mental battle, manipulate the actions of a stormtrooper, pull the lightsaber from the snow over Kylo Ren's attempt at the same thing, and defeats Kylo Ren in the lightsaber battle.

Still, it could be argued that she became too strong too fast. How could she be more powerful than Kylo Ren with such little training? Everyone wants A New Hope to Return of the Jedi transition I guess. I don't know.

But that's not my explanation. She didn't gain them so fast just to move the story along quicker. Touching that lightsaber is the clue. It reminds us that we don't really know Rey's entire past. She seems to not know it completely either. Earlier in the film, we're told about Luke Skywalker wanting to train those who are Force sensitive.

Could it be, prior to Rey being left on Jakku, that she, too, was trained by Luke Skywalker? But since these "younglings" were in danger of the First Order eliminating them, that they were scattered among the planets?And even their memories were altered or removed for their protection?

"There has been an awakening ... have you felt it?"

This memorable line from the movie could be pointing to the fact that the Light Side of the Force is rushing back. It "awakened" in Rey and she is able to show such power with the Force because she already knows it, she's just remembering it all. You could liken it this way: I've done projects around the house fixing things. I've had occasions where I need to fix the same thing twice but 10 years apart. I didn't quite remember how to fix the problem, but once I began analyzing it, it all came back to me. It's a similar thing with her ability to once again use the Force.

What about her appearing stronger than Kylo Ren? Kylo Ren was shown to have great brutality and an ability to control the Dark Side of the Force well. But he was also shown to be insecure. He wants to be like his grandfather, Darth Vader. And when his weakness is exploited, his insecurities cause him to falter, like in the battle with Rey (let's not forget that he was also injured prior to that fight because Chebacca shot him). When things go wrong for him, he loses control and throws a tantrum, as illustrated a couple times in the movie. So the moment Rey showed a small iota of more power than him, he fell apart. We've all been there, right? When you're doing something and it goes wrong? Usually, you get frustrated and are less effective at doing it, perhaps even making a mistake or two along the way. This allowed Rey to overpower Kylo Ren, despite the fact that we all felt he was stronger than her in the Force.

So was Rey overpowered in the Force? In my opinion, no. In classic Star Wars fashion, there is more to the story than what is on screen. And it has people talking and wondering. They've captured the magic of the original trilogy and the next few years are gonna be a fun ride.