In my last post, I discussed how I go about designing covers for my book. That post covered "The First Layer", which is the main background cover image.

So off to "The Second Layer"! What is it?

That would be the book title.

It's important to make the title stand out properly. Doing so is the difference between a book cover that looks professional and one that screams mediocrity.

Remember, often the cover is the first impression of a book. If the cover is boring and drab, potential readers will assume your book is, too. I know, I know. "Don't judge a book by its cover." But, well, that's the first thing people often do, whether consciously or not.

Pick a font that pops and don't just use the default settings for the font. Vary and alter it to the best of your ability to give it some life. A good way to do this is to research book covers in the genre you wrote. Pay attention to how the title is presented.

For The Legend of Kyd Lumin, which is a science fiction space opera with a flare of adventure and fun, I researched all kinds of stuff, but mostly pulp fiction books and comics. These captured the feel of the story and conveyed to potential readers what to expect from my book. That's why I used them as the basis for my design.

In the example below, you can see that I used two fonts for the title. I also varied the size of the words (and even the letters). From there, I added a solid black shadow, colored "The Legend of" white and colored "Kyd Lumin" in an adventurous red-to-yellow gradient.

The result is something I really like. So much so that I consider this the logo for the book also. Wherever I display this title (except it simple text), I will use this logo. 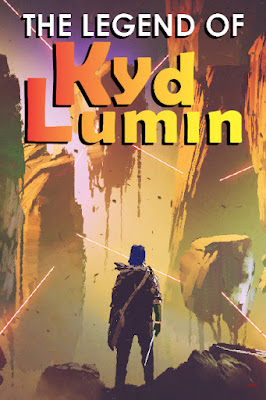 Now, while this title is good. future modifications will come to it. Read on to "The Third Layer" for more details.