In my last post, I spoke about "The Second Layer" of designing a book cover, which is making sure you title stands out well.

Now we head to "The Third Layer".

This one probably will seem obvious and it complements "The Second Layer". It is your author name.

It's important that your author name be positioned and sized correctly. There are a few approaches to this.

For well known authors—for instance Stephen King or James Patterson—having the author name prominent and big on the cover is good. The reason is, their names are so popular that the author name sells the book more so than the book title sells it. As a self-published author you could use this thought process for your cover to give the impression that you are a popular author. Of course, your mileage will vary with this approach.

The other option is to not allow the author name to dominate the content. So you would want it to be smaller than the title. You could even make it barely noticeable if you are keen on the book cover doing all the selling.

As far as the font goes, you typically would want to avoid something stylized like you would with the title. However, there is nothing wrong with using an unexpected font, just make sure it's legible and fits the rest of the cover well. Most times, you place it along the top or bottom of the cover. If the design works, you could have it in other places. Just make sure it looks natural in its placement and doesn't draw undue attention.

For The Legend of Kyd Lumin, I chose to use a font I felt fit in with the rest of the cover (it's actually the same as what is used for "Kyd Lumin"). I kept it toward the bottom so the "The First and Second Layers" are predominately what the viewer sees first. I then added a drop shadow to it to make it pop slightly.

The result is the image below: 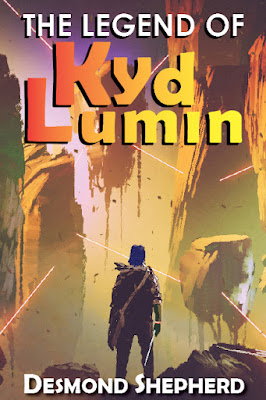 Now, I have a book cover. But I can't settle for this. I liken this to baking a cake but not adding any icing or decoration to it. Sure, it's still might taste good, but it'll really taste great once those additions are made.
In my next post, I'll discuss what can be done for those things, with "The Fourth Layer".