It's Time for Another Novel (with Title and Cover Reveal)

In late July/early August 2022, I had that nagging feeling pop into my head for a story. The first part involved a mash-up of a murder mystery mixed with some sci-fi intrigue.

Sometimes, those types of thoughts are fleeting. But this one stuck with me. I started working out a plot for the story. Then characters. Back story. Et cetera, et cetera, et cetera. And all of this bounced around in my brain without a single thought put in writing.

Then, in mid-August, I put my thoughts to paper (more like a computer screen). First, I fleshed out the back story. Next, I provided more detail about the main characters. Then, chapter by chapter, I outlined how the entire story would unfold.

It may have been a month or two of getting that all in line before I started writing the novel properly. As it stands now, I currently finished chapter eight. As it usually goes with the writing process, things have changed. Finishing chapter eight is actually finishing chapter eleven of the original outline.

I also had been kicking around the title idea and cover options. There was an initial struggle with the title. I liked it, but it felt cliche and unoriginal in some respects. I wanted something that caught a person's eye. Something that, when they saw the title and cover, made them go, "What is this?" They would have to click through to satisfy their curiosity at seeing the oddity.

That's when it hit me!

An integral part of the story can be used for the title. On top of that, I can create my own form of a commonly known word. We've seen authors often do it when they take a noun and make it a verb. Of course, the created verb isn't a word, but it makes perfect sense in the context of creative writing.

For instance, if a character has keys that they put inside of their pocket, you might write it this way:

But if we take a noun and make it a verb, it reads in a fun way:
It was this concept that made me decide on the title. And once I had the title, the cover was a no-brainer.
As announced on my Twitter profile this week, the title of my next novel is Watermeloned: A Mystery Sci-Fi Novel. Below is the book cover. I'd love to hear your thoughts on both. Feel free to comment below or let me know on Twitter.
More details will come for the book, including the release date, beta reading opportunities, and more! 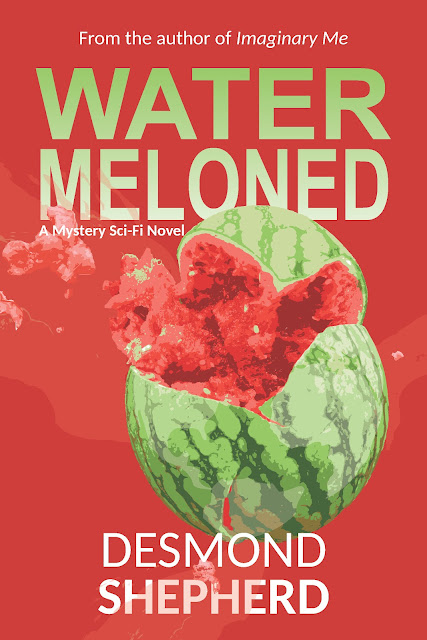