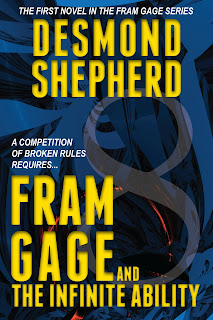 Within Biality Orphanage is a special room called The Ability Chamber. It gives children abilities such as Super Speed, Invisibility, and Wall Climbing in competitions against each other.

Those who run the orphanage call upon Fram Gage, a couple of his friends, and an outsider for a special contest. During the match, rules within The Ability Chamber change and put the children’s lives in danger.

In order to make it through safely, they must work together. And a unique ability they never imagined possible—the Infinite ability—may be the one thing that helps them reach their goal.
Fram Gage and The Infinite Ability is available in print, digital and audiobook on:
Amazon | Apple Books | Google Play | Barnes & Noble | Smashwords
Audible | iTunes 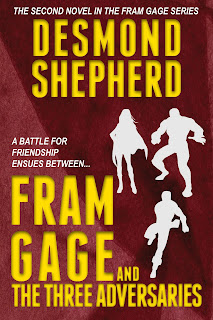 Three years after the tragedy in The Ability Chamber that left him in a coma, Fram Gage wakes up in Biality Orphanage. Not only has he changed physically, but his friends have changed in more ways than he can count. He wants life to return to normal.
But a sudden accident in the orphanage ruins that hope and leaves him alone. On top of that, three people emerge with special abilities, and they want to capture him.

Fram discovers these adversaries are the key to solving his problems. Using his Infinite ability, he's determined to stop them and gain back those he lost.
Fram Gage and The Three Adversaries is available in print and digital on:
Amazon | Apple Books | Google Play | Barnes & Noble | Smashwords 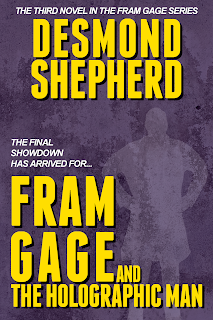 The final showdown has arrived!
Orphans Fram Gage and his friends hope to be reunited with their parents. But The Holographic Man has other plans for them.
He's trapped them within the confines of a holographic world where their forgotten pasts are revealed. What they learn affects them in ways they never imagined possible.
They must overcome adversity, heartbreaking revelations, and painful truths in their determination to put an end to the Holographic Man, escape, and ultimately, find their parents.
Will they succeed?
Fram Gage and The Holographic Man is available in print and digital on:
Amazon | Apple Books | Google Play | Barnes & Noble | Smashwords

In my last post, I spoke about "The Third Layer" in my process of designing book covers. That was adding the author name. I also likened layers one through three to being a cake. It's baked. The layers are stacked. And it's edible. But in order to entice someone to eat the cake, the final decorations—icing, color, flowers, etc.—need to be added. So what can I do with my current book cover to spruce it up? The Fourth Layer of course! This is the crucial and final layer. This is where everything comes together to form the complete book cover. The steps I use below are my own. You'll need to determine what is needed for your cover when you get to this layer. Only you know your book. Only you know what's important. The Fourth Layer is where you can get creative. First, I want to continue with the older adventure book type feel. With The Legend of Kyd Lumin , I want people to think it's a book not published in 2021 but rather, published sometime in the 80'
Post a Comment
Read more

In my last post, I spoke about "The Second Layer" of designing a book cover, which is making sure you title stands out well.  Now we head to "The Third Layer". This one probably will seem obvious and it complements "The Second Layer" . It is your author name. It's important that your author name be positioned and sized correctly. There are a few approaches to this. For well known authors—for instance Stephen King or James Patterson—having the author name prominent and big on the cover is good. The reason is, their names are so popular that the author name sells the book more so than the book title sells it. As a self-published author you could use this thought process for your cover to give the impression that you are a popular author. Of course, your mileage will vary with this approach. The other option is to not allow the author name to dominate the content. So you would want it to be smaller than the title. You could even make it barely noticeable
Post a Comment
Read more