The Legend of Kyd Lumin 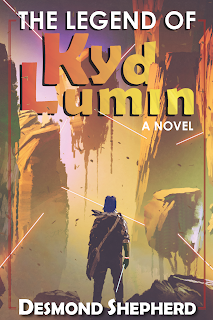 In a distant time and galaxy, far from any known planet or star….

It is an era of dominance for the Elof Empire. Not only have many planets in the galaxy come under its sovereignty, but the people of the planet Hupoge are enslaved by it as an example should any choose to resist the Empire’s control.

On the distant planet of Quarros, which the Empire has yet to conquer, Kyd Lumin—a fugitive Hupogean man, betrayer of the Empire and beacon of hope for the people of Hupoge—has taken refuge. Though he has carved out a satisfying life for himself, has a wife whom he loves and a daughter that he adores, every day of his existence he lives in fear that the Empire will one day find him; they will bring an end to all he cherishes.

Meanwhile, Mairel Elof—heiress to the Empress’s throne—is in pursuit of the Empire’s betrayer. She will capture, kill and conquer anything that stands in her way to successfully carry out that mission.

But a revolt is coming. The Hupogean people will no longer tolerate the tyranny in their lives. The time has arrived for them to take a stand, and they are convinced that Kyd Lumin is the savior that will lead them to victory.

The Legend of Kyd Lumin will be available in print and digital on February 2, 2021. Pre-order your copy today at:

Starting today and running through August 23, 2014, Unspoken Stories is being discounted off the regular price. Normally, the e-book costs $2.99. But starting today, it is only $0.99. It's best to get in on this deal early because the price will slowly go up over the days leading up until it is full price again.

The United States' president and some governors are now recommending people wear a face mask to help prevent the spread of the COVID-19 virus. They're also asking that the N95 masks be reserved for healthcare workers as they help those who are suffering from the virus.

The global crisis regarding the COVID-19 virus (or coronavirus) is affecting anyone and everyone. Whether you get the virus or not, in some way, our lives are being impacted. Schools are closed. Parties discouraged. Social distancing encouraged. Entire countries in lockdown. Toilet paper being bought up like it's gold. The list goes on and on.